“There was once a Cheng woodcutter who found a deer in a field, which he killed and later buried with leaves and branches to prevent others from discovering the piece. But before long, the woodcutter forgot the place where he had hidden the animal and came to believe that the whole thing had actually been a dream.

Soon after, he would begin to tell his supposed dream, to which one of those who heard him reacted, trying to find the deer. After finding him, he took him home and told his wife about the situation, who indicated that perhaps it was he who had dreamed the conversation with the woodcutter, despite the fact that having found the animal the dream would be real. To this, her husband replied that regardless of whether the dream was hers or the lumberjack’s, there was no need to know. 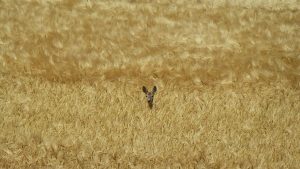 But that same night, the woodcutter who hunted the animal dreamed (this time for real) of the place where he had hidden the body and the person who had found it. In the morning, he went to the house of the discoverer of the animal’s body, after which both men discussed who the piece belonged to. This discussion would be attempted to settle with the help of a judge, who replied that on the one hand, the woodcutter had killed a deer in what he believed to be a dream and later considered that his second dream was a truth, while the other found said deer Although his wife considered that it was he who dreamed of having found it based on the history of the first.

The bottom line was that no one had actually killed the animal, and it was dictated that the case be resolved by dividing the animal between the two men. Later, this story would reach the King of Cheng, who would end up wondering if it really was not the judge who had dreamed of distributing the deer.”

The story of “The hidden deer” is a Chinese folk tale that tells a story based on the differentiation between dream and reality and how difficult it can sometimes be to realize. It is one of the short stories for adults that tell us about the possibility that we can live on various planes of existence.